Made as a producer, writer, and performer.

FOUNTAIN OF LOVE: Top spot on the then number one internet music website Audionet.com

It was liberating and testing but never boring.

It allowed me to expand my horizons and fly on my own.

Writing songs such as Rajasthan

This album was the first effort which I made as a producer, writer, and performer, and it marked the beginning of my professional foray.

It was liberating and testing but never boring. It allowed me to expand my horizons and fly on my own. Writing songs such as Rajasthan, I explored the sounds of traditional folk and modern day electronic samples.

It was a crazy period as I would write and compose all these incredible things I was hearing coming from the sounds of the gear.

I used a Ensoniq ASR-10 for this project with a Yamaha SY-35 Midi keyboard. The Midi syncing was done a Roland MC-500 which when I look back was quite an ordeal. It was like working on a mechanical typewriter. When I compare it to modern day computer programs, it was a really very tedious operation. But nevertheless it allowed me to explore the possibilities within my own space and helped me gain confidence overall. 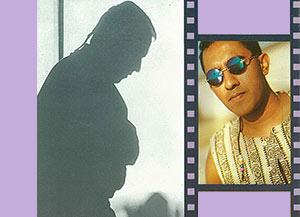 The business side however was a harrowing experience and in my first outing itself, I tasted the bitter side of the music business. I did all I could with complete sincerity and had a top class project but it was an uphill climb as I was a sore aberration in the sea of mediocrity that ruled then.

The recordings were done at un-earthly hours and weekends. The video was made with a lot of effort, with actress Tisca Arora as the female lead. So a lot went into creating what I am still very proud of but it got just a single shot of airplay. Would you believe it was taken of in the repeat show of same episode later in the day.

I was burnt but I learned.

It took me time to recover as I experienced more than I’d bargained for, but I had tasted blood as the reviews for the album were outstanding. It was some solace that at least the reviewers understood what I was doing. Many of them called the album “ahead of it’s time”.

No regrets, and God bless you all.