The experience of the
stupendous success.

TU HI TU: A reflection of the visualization that I had started with and I do believe it was a reward from the cosmos for my perseverance.

It was around that time when I was scouting for another label to release the project that on a Sunday afternoon, the distorted Guitar riff of Tu Hi Tu came to me.

A few things became clear to me after the commercial fiasco of Fountain of Love.

ABCL was due to launch it’s Big B music label

A few things became clear to me after the commercial fiasco of Fountain of Love. One was that I needed to level with the Indian audience and make more commercially viable music which would appeal to more than just the upper denominators. The second was the clear understanding that to reach the number of people that I wanted to, I had to change my language to Hindi.

I wrote 3 new tracks as a demo to show around to the various labels and met most of the better known ones. As expected, from those who were promoting mediocre acts, I got a lukewarm response. It was then that Amitabh Bachchan’s entertainment business foray ABCL was due to launch it’s Big B music label. 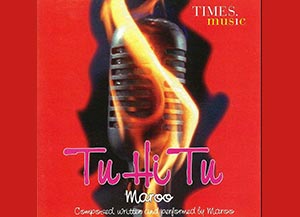 My work was selected and I signed up with the prestigious label and recorded the entire album with my bro and one of India’s foremost sound engineers Rajiv Kenkre at the Fourth dimension studio. It was due for release. Even the posters were ready and adorned the board in the company lobby.

Around the time there was a good buzz around the sound in the company and I was offered a chance to produce a demo track for the winners of Startrack talent hunt . This project was the most prestigious job that a music producer at that time could have asked for.

We recorded a group track with the eight finalists who were selected by some of the biggest names in the industry and it turned out rather special and I was soon finalized to produce the entire project with the 8 singers and Shyam Anuragi (one the hottest lyricists of the time). We had recorded upto 7 tracks of the 9 planned tracks and were about to complete the recordings when financial constraints crept in and the project which started with much fanfare eventually ground to a slow halt.

Just at the same time I had to turn down a recording with A.R.Rahman due to my business commitments. I got a call from his Chennai studio asking me to board the evening flight as he wanted me for a recording that night but I couldn’t confirm it due to an important business obligation.

Could have been my ticket to Bollywood but wasn’t meant to be.

On seeing a dead end at ABCL, I bought back the rights of my own music because I knew I had some serious material with me.

It was around that time when I was scouting for another label to release the project that on a Sunday afternoon, the distorted Guitar riff of Tu Hi Tu came to me.

The song came to me in a matter of a few hours and did not really take much time to record either. I remember it was recorded by my pal Tejasvi Rao at Farhad Wadia’s studio in a single day and we finalized the mix the same evening too.

Once again the album Ti Hi Tu was rejected by some of the best labels of the time and I was once again put through a situation that was beyond any control. One A & R rep, even had the audacity to tell me it was “the worst music he had ever heard in his life” and advised me to spend my time only doing my business.

Determined, I hung on to my work and kept trying wherever I could. Fortune favours the brave and launch of Times Music came along and gave me the break of a lifetime.

The experience of the stupendous success of Tu Hi Tu, was a reflection of the visualization that I had started with and I do believe it was a reward from the cosmos for my perseverance.